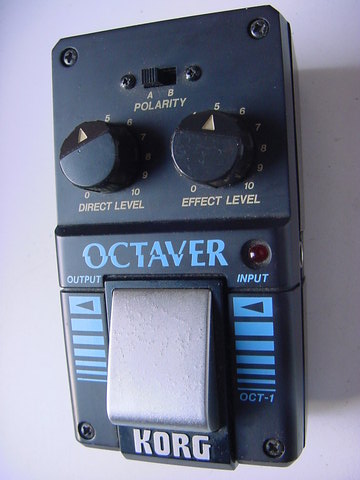 The Korg OCT-1 is a simple monophonic, analogue, octave down pedal. It is essentially identical to the Yamaha OC-01 pedal which debuted around 1980. (The earliest reference I have found to the Korg Series 1 effects - all of which are the same as the Yamaha PSE Series - is from a 1985 Korg product catalogue.)

The main difference between the Yamaha and Korg, is that the Yamaha pedals were designed to fit into one of the modular PSE pedal board systems*. While they could still be used as standalone stompboxes, the Korg counterparts are a better choice these days as they have the convenience of a ‘standard’ 2.1mm barrel type DC input.

* For details of the Yamaha PSE series pedals and modular board systems see HERE.


The OCT-1 has self explanatory ‘Direct Level’ and ‘Effect Level’ controls but also a ‘Polarity’ toggle switch. This doesn’t seem to make any audible difference despite my best efforts to hear one!

To be honest, I wouldn’t use this with an ordinary guitar to replace a proper bass. The effect glitches too readily in my opinion. Although, once in a band mix, you could probably fool a lot of people with it.

In most situations, I think this effect sounds best if you keep the direct level at unity (retaining more note attack), and then mix in some of the lower octave (to add weight).


With this type of effect, it is important for the pedal to receive a clear signal from your guitar in order to perform at its best. I find that using the neck pickup and/or rolling off some treble with the guitar’s tone control helps a great deal with tracking. These measures so some way to reducing the harmonic overtones in the signal and sending a truer pitch to the effect.

You also have to be very precise when playing (vibrato, pitch bends, string noise etc. can all interfere with the Octaver and cause a glitching effect… some people may like that of course!

Combined with other effects such as distortion, the Octaver gets a bit more useful in my opinion. At subtle levels, it adds weight and body to single note lines but can also add a synth-like quality. It even sounds OK to me with power chords and octave riffs; it does get a bit too messy with anything more complex than that though - even a straightforward major or minor triad.

I’m not completely sold on the OCT-1. It lacks punch and is just a bit too glitchy and ultimately unsatisfying for me.

Both the Boss OC-2 Octave and Danelectro DJ-12 Chili Dog Octave go beyond what the Korg OCT-1 offers by adding an extra signal - two octaves down - to the mix. While they do require a similar amount of care and precision (when playing) to get the best out of them, the effects they produce are more consistent and much punchier than the Korg.