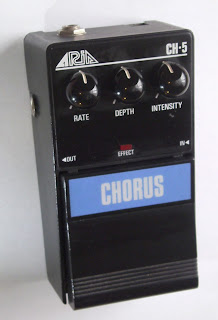 The CH-5 Chorus comes from the original Pro II Series of pedals which were first available around 1986, and shouldn’t be confused with – or even associated with – the more recent, re-hashed Pro-II Series which are far more commonly seen on eBay (in the UK). The earlier pedals feature a rugged, metal construction whereas the later pedals are plastic and were definitely built to a budget.

The CH-5 is a stereo chorus pedal, with controls for Rate, Depth and Intensity (delay time).

It is immediately evident when you turn it on that it is unlike most other chorus pedals – particularly other 80s chorus pedals – which tend to sound bright and shimmery. The CH-5 is noticeably dark in character.

This trait will likely endear it to those out there who find the trademark bright, swirly, 80s chorus sound to be grating. The darker effect generally comes across as being more subtle; sitting behind the direct signal and adding depth rather than immediately overpowering it. I also find darker voiced chorus effects sound better with distortion (although this is purely my own opinion), as the effect adds thickness and movement without the watery, processed, sometimes-metallic character that brighter chorusing can impart.

The Rate and Depth controls offer a fairly wide range without really going far enough for extreme/weird sounds; it’s hard to find a setting that doesn’t sound musical. Using the Intensity control, it is possible to go from subtle chorus to very wobbly, almost-vibrato-like effects*; small adjustments can make a big difference.
* Putting a dummy jack in the second output turns this pedal into a true vibrato pedal if you so wish. 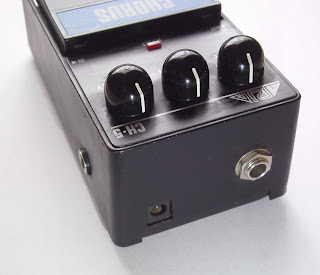 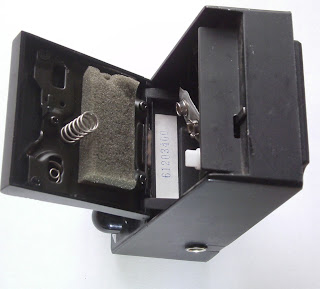 To sum up, the Aria CH-5 delivers the goods with a distinctive character and richness, and would be particularly well suited to someone using lots of distortion, or someone not wanting their modulation effects to totally mask the guitar signal.

This function allows the user to switch between two user-defined chorus/vibrato rates. However, I didn't find this function that useful as when changing the speed of a chorus effect, I'd usually want to adjust the depth too. It is a nice idea though.