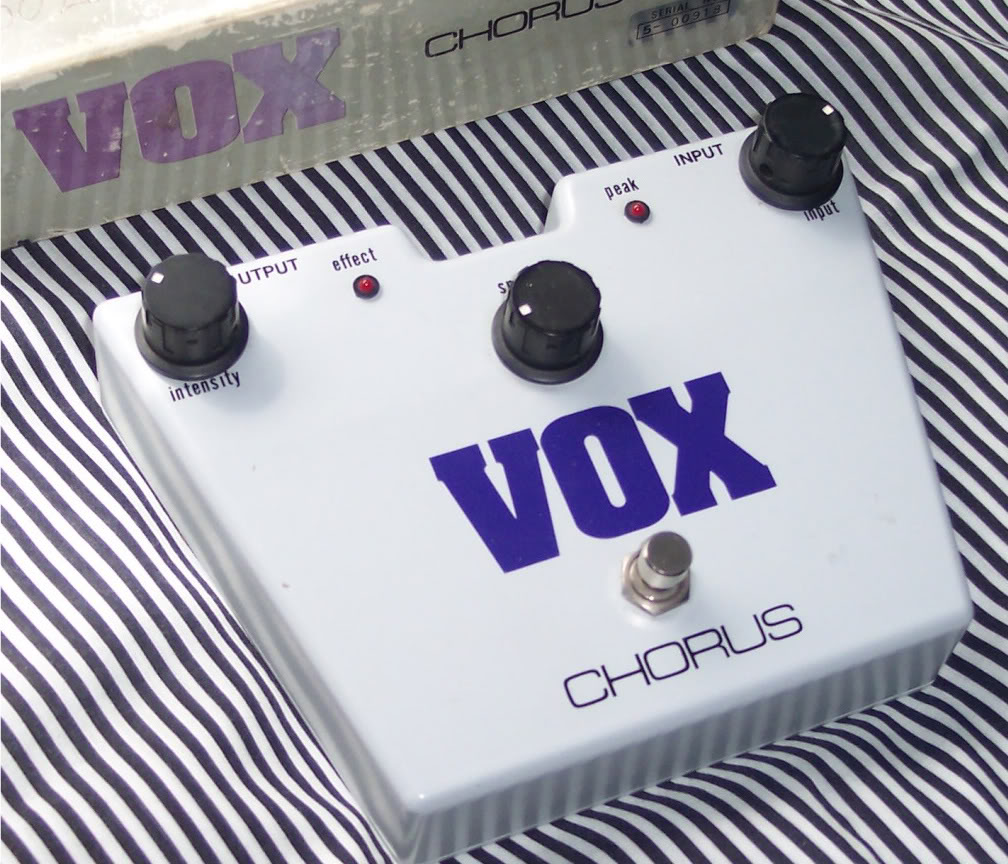 The Vox 1905 Chorus is very straightforward to use. There are three controls; the usual Intensity (depth) and Speed, and also an 'Input' control. The Input control is a gain control for the chorus circuit but almost acts more like an effect level control.

The instructions state that the Input should set so that the peak LED lights up occasionally, but I find that its setting is also linked to the effect depth and prominence. Lower Input level settings (even with the Intensity dialled right up) will produce a fairly mild chorus; around halfway sounds right to me for most things; or by turning it up further the modulated signal will become louder and stronger with a very vibrato-esque effect the result. [It's not quite a vibrato as the direct signal can still be heard - although not always very easily.]

Even with the Input level turned up (so the peak LED is almost constantly lit), I don't really hear any negative artefacts in the output. [Although, if your guitar has very high output pick-ups, your experience could differ from mine.]


Unlike most modern chorus pedals, the 1905 Chorus runs at 18v and, being a 1970s-designed effect, the sound produced is warmer, softer and more subtle than the shimmering chorusing we're more used to hearing today.

While the 1905 Chorus is excellent at subtle thickening effects, it is also capable of more prominent sounds with extreme settings. The waveform is nice and wobbly; not too precise and has a bit of a spring and bounce to it.


If you are in the market for a chorus pedal but don't want one that is too bright or cheesy sounding, the Vox 1905 is one that is well worth investigating.


It is one of the best I've used for subtle movement and thickening but it can also be pushed for more out-there sounds. And it looks super-cool!
Related:

As I mentioned in my review of the Vox 1901 Distortion, the six pedals that made up Vox's 1900 Series of effects pedals were largely just re-housings of selected 1970s Guyatone effects.