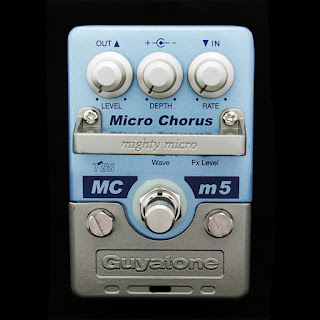 Very compact size but packed with features; unusually, there is even a master Level control so the MCm5 is not afflicted by any kind of volume boost/drop which can be very common with effects of this type.

It of course has standard Depth and Rate controls - the range of speeds is huge and the modulation can go a lot faster than I'd usually have any use for, which is both a good and bad thing. Good as it provides a wider palette of effects but bad as it makes fine adjustments slightly more difficult.

As with all of the Mighty Micro pedals, there is a mini trim (external) control which, in this case controls the dry:wet blend. Mix controls are something that I'd like to see on all chorus pedals as it opens up so many more possibilities; from very subtle, through very pronounced chorusing to 100% vibrato.

The final control - I saved the best for last - is a three position waveform switch. This is pretty much unheard of in compact, mass-produced chorus pedals. It essentially gives you three pedals in one as each waveform is very distinctive.

The three waveforms are:
Sonically, the MCm5 leans towards a sparkly, shimmering effect which can sound very pretty BUT, while I am a big fan of this pedal, I have to point out that it isn't perfect as, in some circumstances there are noise issues...

When used in front of an amp there is a noticeable amount of hiss (while the effect is engaged); this doesn't really bother me but I know a lot of people are very touchy about any kind of noise in their effect chains. HOWEVER, I've found that it is almost silent when used in an amp's effects loop or when I've used it with line level signals in a recording/mixing environment.

The second issue, is that when in bypass (Guyatone use a true-bypass method) you can hear an LFO tick through your amp which is in tempo with the effect. I have experienced this problem with the two MCm5s that I've used (including the one from my own collection) - and it is also an issue which afflicts other pedals such as the Boss PN-2 - but the good news is that this issue is easily eradicated... As long as there is some kind of active circuitry* between your guitar and the pedal, the ticking goes away completely.

* This active circuitry can include a variety of things such as the preamp in an active guitar/bass, a buffered pedal or a true-bypass pedal that is left on (e.g. clean boost), and of course an amp's preamp if you're running this pedal in an effects loop.

If you can live with, or find solutions for its noise issues, the MCm5 should be able to cover all of your chorus and vibrato needs. And then some.