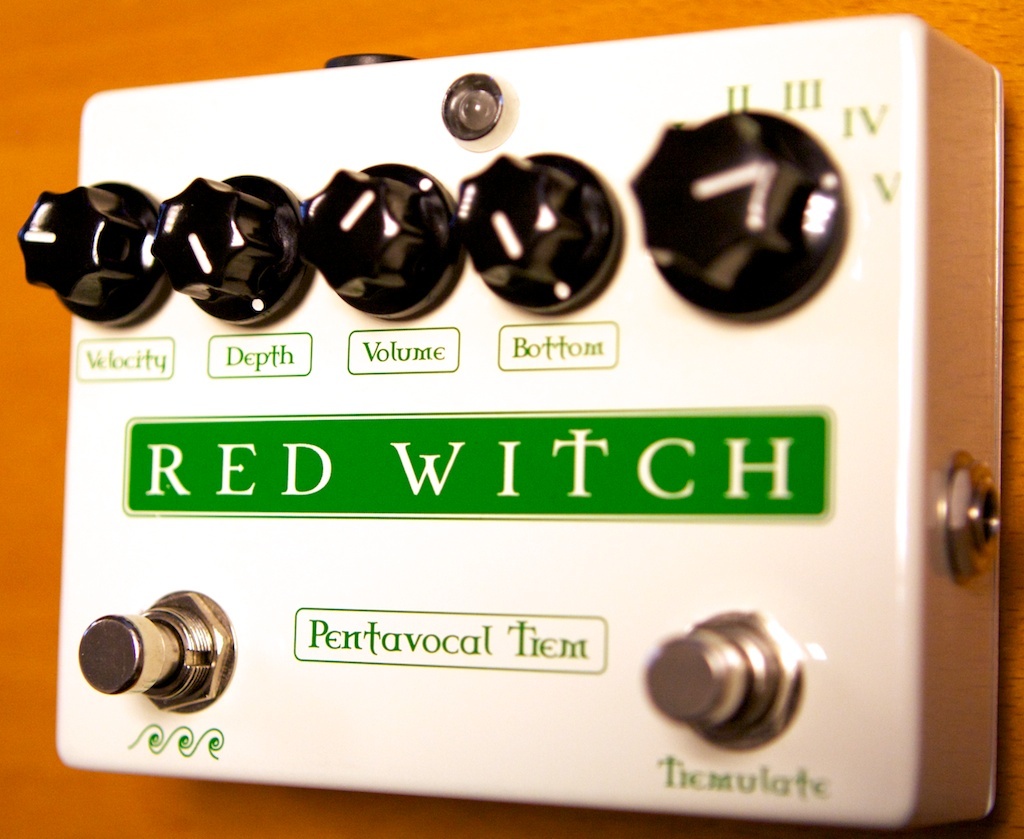 Red Witch's Pentavocal Trem represents something of a fresh take on the traditional tremolo effect.

Many modern tremolo pedals fall into one of two camps, they either try to model a specific amplifier's tremolo circuit, or they throw as many features as possible at the user (e.g. tap tempo, multiple waveforms, step sequencers etc.). The Pentavocal Trem approaches things from a different angle. From the bottom.

Red Witch have taken this simple amplitude modulation effect we all love so much, and added tone shaping options to it. The major feature, the inspiration for the pedal's name, is controlled by the 5-way rotary switch which sits above the right-hand (on/off) footswitch. This switches between - if you haven't guessed yet - five voicings for the circuit.

Voice 5 is the fullest sounding; the neutral setting. As you turn the rotary switch to the left, the emphasis changes with a loss of low end and a bias creeping towards that of the treble frequencies; it gradually thins out until you get to the bright and shimmery tones of Voice 1.

The other four controls (going from left to right) are Velocity (rate/speed), Depth, Volume and Bottom. The first three are familiar enough with no need for further discussion, except to say that the volume control is an absolute necessity - depending on which 'voice' you're using and how the Bottom control is set, the output level can vary greatly so the volume control is there to compensate. The Bottom control however, that definitely requires a little explanation.

With Bottom set to the centre it is 'off'. The Pentavocal will operate as we'd expect a tremolo pedal to function.

Turning the Bottom control down, according to the manual, will reduce the low end; turn it all the way down and as the volume decreases in the tremolo cycle the low end will disappear. Away from the written manual, the real-life audible effect is that turning the Bottom control down allows more and more of the high end to pass through the pedal untouched by the tremolo; the lower frequencies will be pulsing away while the higher frequencies sit on top. Subtle use of this feature can give the tremolo a lovely treble sheen, which is especially pleasing while playing clean arpeggiated chords.

This effect is the same as what is achieved by the tone control on the Nobels TR-X (see Alternatives box below), although I would say that the Pentavocal Trem processes your signal in a more elegant, refined manner. With the Red Witch pedal, the output sounds more natural with the modulated signal blending in seamlessly whereas with the TR-X, (while it is still a lovely effect) the signals combine in a more obviously-layered way - there is a slight separation in the two signals which the Pentavocal doesn't have.


You may expect that turning the Bottom control up will produce the exact opposite, allowing the low end through and modulating the high and mid frequencies only. But that is not the case. As you turn the Bottom up, more and more of the treble and midrange frequency content is removed lending the overall effect a completely different feel - I suppose "warm" or "vintage" would be the buzzwords some might use to describe the resultant tone.

The feature set is rounded off with the expected input, output and 9v DC jacks, a too-bright LED which flashes in time with the tempo and two footswitches; one for bypass and one to switch between soft and hard tremolo.

* * *
It took me a while to get the Pentavocal Trem as I was initially put off by the voicings you were forced to use. Nine times out of ten I don't want my modulation effects to alter my tone too much. I just thought the voice options were completely unnecessary.

Once I got over that, I discovered that there is a lot of fun to be had and the Pentavocal Trem can almost be considered to be as much an EQ/tone-shaper as it is a tremolo pedal. You can even use it as a clean boost pedal!

While there is still the restriction of just five presets rather than continuous control of the voicing, the combination of the voice options and the Bottom control gives the user so many possibilities for tonal tweaking. Forgetting for a moment that this is primarily a tremolo pedal: if your guitar tone is just a little short of how you want it to sound, then the Pentavocal Trem could quite conceivably be the final piece of your sonic jigsaw.

But this is a tremolo pedal

As mentioned earlier, the soft or hard tremolo modes are footswitchable. This is quite useful from a performance perspective, but it's perhaps a little unhelpful that there is no visual indication of which mode you're in. An LED indicator would have been much appreciated and surely not too difficult to have incorporated.

The soft tremolo mode is exactly what you expect; lovely. The hard tremolo setting however is a bit of a let-down by comparison. It will not satisfy those of you who like a good square wave stutter; it's just not choppy enough and can't compete with the likes of a Boss PN-2 or Empress Tremolo in this regard.


* * *
I should also mention that there is a bonus feature of the Pentavocal Trem which reveals itself in certain situations. With the Bottom control turned up and with a lower numbered voice position selected (voice option one is the best for this), the tremolo gets a bit wobbly. And I mean wobbly from a pitch perspective. It's quite reserved and subtle, but it's a beautiful sound - if there was a pedal that only did this, I'd buy it!

I'm very picky about tremolo pedals and have only a couple minor gripes with the Pentavocal Trem, minor niggles that don't really matter in the grand scheme of things. It could be choppier (to suit modern tastes) and there could be an LED mode indicator, but otherwise there's little in the way of room for improvement.

The soft-yet-characterful tremolo effects that can be coaxed from this little box are simply gorgeous - crank the Bottom control up and you could easily mistake the most modern of amps for a vintage treasure.

The Pentavocal Trem is close to perfect and would also make an ideal studio pedal, owing to its tone shaping functions - especially if you have a limited number of amps available to you.

While I am not familiar with any other tremolo pedal that does everything the Pentavocal Trem can do, there are quite a few that share elements.


DOD FX22 Vibrothang
(Discofreq’s Effects Database page.)
Good substitute for the Pentavocal's dark tremolo and can also do a gentle flutter with a touch of wobble.

Nobels TR-X Tremolo
(Discofreq’s Effects Database page.)
The TR-X has it's own tone 'trick' up its sleeve, matching half of the Pentavocal's Bottom control function: want a low-end tremolo with the highs ringing true? The TR-X's tone control lets you have just that.

Guyatone VTm5 Veri-Trem
(Discofreq’s Effects Database page.)
The Veri-Trem has a low-pass filter control which competes with the darkening options of the Pentavocal Trem's Bottom control; superb for swampy tremolo effects (when used in moderation - it can get much murkier than the Red Witch allows). The Veri-Trem features three waveforms: a subtle sine, an authentic triangle and a square wave which, while not the choppiest, is much stronger than the Pentavocal is capable of.


Lovetone Wobulator
(Discofreq’s Effects Database page.)
Smooth and subtle with a hint of something more. Using the split frequency options, where a high-pass filtered signal and low-pass filtered signal can each be assigned their own tremolo depth, it can match the treble-pass-through options offered by the Pentavocal Trem (and Nobels TR-X), but it can work both ways - you can have the low end pulse with shimmering treble, or you can leave the low end intact and modulate the top.